Staff at Library and Archives Canada were treated to an intimate serenade by Canadian rock legend Michel Pagliaro on Friday to mark the official donation of his personal music archives to LAC.

The 68-year-old singer-songwriter, producer and guitarist — known as the dean of Quebec rock or “Pag” to his many ardent fans — made the appearance to celebrate the transfer of five decades (1961-2016) of material, including textual documents, photos, sound and video recordings, and posters.

Guy Berthiaume, Librarian and Archivist of Canada (LAC), says this “treasure trove” will ensure Pagliaro’s contribution to Canadian music — both published and unpublished — is preserved and perpetuated for future generations.

“I thought the fact that he was the first singer to actually make it significantly on the French and the English charts at the same when it was not done (is significant),” said Berthiaume. “Because of Celine Dion we think now it’s done all the time but it wasn’t back in the ’70s and early ’80s, so I figured this is truly a national figure and we should have his archives here.”

Pagliaro has been recording in both official languages since the late ’60s. A few of his notable French classics include J’entends frapper and Ça va brasser, and ’70s English hits Loving You Ain’t Easy and Rainshowers, which he performed inside a large meeting room at the Gatineau headquarters. Pagliaro said when he received the call to archive his work, he did not hesitate.

“When your country tells you, ‘Hey, we’d like to have something that belongs to your past to put in the national archive,’ it’s an honour,” said Pagliaro, sporting his signature sunglasses and shaggy salt and pepper hair. “I was very fortunate to have the opportunity, and I’m happy to be here.”

Pagliaro, currently a mentor on La Voix the French Canadian version of The Voice, was awarded the Governor General’s Performing Arts Award in 2008, and was the first Canadian artist to receive a gold record for both his English and French hit songs. In 1972, Pagliaro won a Gold Leaf Award (later the Juno Awards) for best male singer, for which he was also nominated for in 1975. His song J’entends frapper became the bestselling single in Quebec history, and was inducted into the Canadian Songwriters Hall of Fame in 2010.

And while he’s handed over a lifetime of material, he’s not ready to hang up his guitar just yet.

“I’m just happy that I keep doing what I love to do, and I try to do it as much as I can,” said Pagliaro, who is scheduled to perform at various music festivals around Ontario this summer. 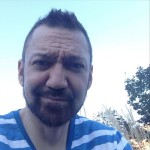